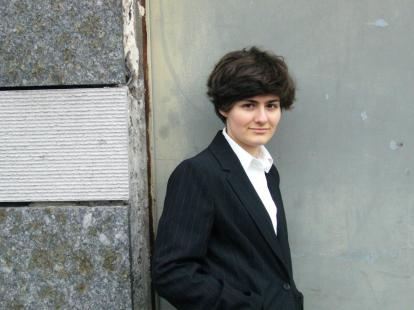 Esther Assuied firstly studied piano with Raymond Alessandrini and Brigitte Bouthinon-Dumas before being admitted unanimously, at the age of 14, to the CNSM in Paris ; she obtained her Master’s degree after having worked successively with Michel Béroff, Frank Braley and Michel Dalberto.

She has won many international competitions since the age of seven (Arcachon in 2004 and 2005, Vulaines in 2005 and 2006, Flame in 2007) and participates very regularly in musical summer courses and master classes. In 2014, she is selected among 1040 candidates to be one of the 32 participants in the contest Horowitz of Kiev (the contest did not happen because of the political difficulties of Ukraine). She is also laureate of the Piano Campus competition and was the only French candidate selected at the 2013 edition of the Lagny-sur-Marne competition.
Grand Prix d’Honneur of the Bellan 2013 competition, she holds a scholarship in the Cap-Ferret Academy and is invited to give several concerts. She follows in parallel the teaching of Olivier Cazal and Fabio Bidini.
She gives concerts, alone or with orchestra (Bach concertos, Stravinsky’s orchestral pieces with piano, Copland). She participates in several creations and performs in internationally renowned festivals (Giverny Chamber Music Festival, Piano Campus, Annecy Classic Festival).

She then became interested in other keyboard instruments and, in 2016, is admitted unanimously in Patrick Cohen’s pianoforte class at the CNSM of Paris. She also studied harpsichord with Françoise Marmin and Elisabeth Joyé ; she has a regular activity of continuo.

She started the organ in 2014 with Philippe Brandeis ; from 2015, she decided to devote herself to it and began a parallel career that led her to give concerts all over France. She studied this instrument with Paul Goussot and Christophe Mantoux. She obtains in his class the DEM unanimously with the congratulations of the jury in 2016 and the Perfectionnement degree in 2018, with the same mention. In 2019, she’s accepted unanimously in the organ class of Olivier Latry and Michel Bouvard at the CNSM in Paris.

She also intends herself in literature.